Karl Barth and the Analogia Entis

Keith L. Johnson Oct 19, 2021 Keith L. Johnson
Many interpreters argue that Karl Barth's rejection of the Roman Catholic analogia entis was based upon a mistaken interpretation of the principle, and many scholars also contend that late in his career, Barth changed his mind about the analogia entis, either by withdrawing his rejection of it or by adopting some form of it as his own. This book challenges both views, and by doing so, it opens up new avenues for ecumenical dialogue between Protestants and Roman Catholics. In short, this book establishes that Barth did not make a mistake when he rejected the analogia entis and that he also never wavered on his critique of it; he did, however, change his response to it-not by breaking with his earlier thought, but by deepening it so that a true Christological dialogue could take place between Protestant and Roman Catholic theologians. This conclusion will be used to point the way to new terrain for ecumenical dialogue in contemporary discussions. 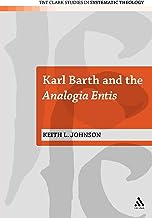